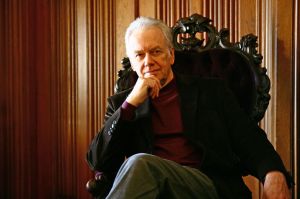 You may have heard of a novel called Psycho. Some fellow made a movie of Robert Bloch’s novel which, arguably, changed the course of movies and horror fiction forever. Without Norman Bates there wouldn’t have been a whole slew of slasher movies, or sly, charming killers such as Hannibal Lecter, Patrick Bateman and Dexter Morgan.

In the years since Hitchcock’s movie, Bates, the nerdy fellow with the Mummy issues, has been reinvented several times — sequels followed, and a TV series. But Bloch’s original novel has remained somewhat under the radar. Now Chet Williamson has taken Bates back to his gritty midwestern roots. He’s written an authorised sequel to Bloch’s book, called Psycho: Sanitarium.

In this terrific interview, Williamson talks about what is like to get his hands on one of the most famous characters in fiction, about how Hitchcock’s Bates swerved from Bloch’s original vision — and how, if you want to be a successful writer, it’s perhaps best to stay pessimistic…

How does it feel to have got your hands on one the most iconic characters in crime fiction – Norman Bates?

It feels fantastic! The film of Psycho terrified me when I saw it as a kid, and I immediately bought the Robert Bloch book and have been a Bloch fan my whole life. To be offered a character that is such an icon of suspense and horror fiction was a dream come true. Having done some licensed characters in the past, I’d determined never to do so again, but to have the opportunity to create a novel with Norman Bates?

There was no way I could say no, especially since it was an immediate sequel to Bloch’s original novel, and I could tell the story of what happens after we leave Norman (and Mother) in his little cell after his arrest. I’d always loved the character, who is as sympathetic and empathetic as he is frightening.

We’re familiar with Hitchcock’s adaptation, but maybe not so much with Robert Bloch’s source novel – how does it differ from the movie?

For one thing, Norman isn’t nearly as physically attractive as Anthony Perkins. He’s in his forties rather than his twenties, and he’s somewhat overweight, which makes his discomfort with the opposite sex more believable. Also, the original isn’t set in California. Bloch never names a state, but internal evidence suggests somewhere in the Kansas/Missouri/Oklahoma/Arkansas area.

How has Norman changed since we last met him?

Not much, really. Only a few months have passed since his arrest and confinement, and he’s remained almost completely incommunicative. He’s trying to break out of his shell, but Mother’s having none of it.

What do you think you have brought to the character that wasn’t in Bloch’s original vision?

I may be a bit more sympathetic toward Norman than Robert Bloch was. While Bloch makes you feel sympathetic toward him in the original novel, when he wrote Psycho II, which is set over twenty years later (and which has nothing to do with the Psycho 2 film), he makes Norman quite monstrous, and his initial acts of violence, which are perpetrated by Norman himself rather than Mother, are shocking in the extreme. I’ve tried to elicit in the reader a greater empathy toward and understanding of Norman, the same feelings that Bloch elicited in the original Psycho back in 1959.

Norman’s in a Hospital For The Criminally Insane, which is fertile ground for crime and horror writers – did you have any other favourite authors or movies you returned to for inspiration?

Nothing fictional, really, though I did turn, for both research and inspiration, to the 1967 Frederick Wiseman documentary, Titicut Follies, set in Bridgewater State Hospital for the criminally insane in Massachusetts. If you think fictional films about early psychiatric care are shocking, the real thing as seen in this film is utterly horrifying.

If you could get your hands on another iconic crime fiction character, who would it be?

Well, I do love villains. I’ve always wanted to do something with a super-criminal along the lines of Fantomas or Dr. Mabuse, which I think would be fascinating in these times when he who controls the Internet controls the world.

How did you start writing?

A: I came to it through acting. It’s a long story, but as an actor, which I did professionally for a time, it wasn’t long before I realized that the true creators were the writers. I started writing for theatre, and then turned to fiction. I still keep my hand in as an actor by narrating audiobooks — in fact, I’ve just completed the audiobook of Psycho: Sanitarium. It’s always a delight for me to record my own work, since I know the characters will sound as I intended them to sound.

What’s the hardest lesson you ever had to learn about writing?

A: Not to give up, and never to expect too much. Stay pessimistic and you’ll never be too disappointed to continue. Write for yourself and for those readers who relate to your work.  It’s a rough way to make a living, even more so now with all the competition from self-published writers on the Internet. Fortunately I’ve had a supportive wife all these years. It’s very tough to survive on your own.

Who are the authors you admire, and why?

Of the old masters, Joseph Conrad, for his ability to make readers see,  P. G. Wodehouse, for never failing to make me laugh, M. R. James, for his truly terrifying ghost stories, and H. P. Lovecraft, one of the most alien writers and human beings imaginable. From my childhood, Robert Bloch, whose clean style I’ve always admired and tried to emulate, and Richard Matheson and Ray Bradbury, for their unfettered imaginations. Contemporary writers include Joe R. Lansdale, pound for pound the best writer in America today, and the UK’s Ramsey Campbell, a superb stylist and storyteller.

Give me some advice about writing…

My advice is to not ever take any advice on writing. Seriously. Everyone works in different ways. Be true to your own method of working. If outlining works for you, then outline. If you’re happier just forging ahead without an idea of where you’re going and can fix things during revision, then do it.

The only books on writing I’ve ever read that were worth a damn were the American John Gardner’s trilogy, On Moral Fiction, On Becoming a Novelist, and The Art of Fiction, and Oscar Lee Brownstein’s Strategies of Drama, which is primarily for playwrights but equally valuable for fiction writers. Whatever you do, avoid books that say, “This is what you must do.” No, you mustn’t.

What’s next for you?

It’s been a full year, with the Psycho book and two collections having come out (The Night Listener and Others from England’s PS Publishing and A Little Blue Book of Bibliomancy from Borderlands Press). So after Psycho: Sanitarium is safely launched, I’m planning on doing some reading and research in preparation for a new novel. I have a thematic idea, but little else, and being that I’m an outliner, there’s work to be done!

Psycho: Sanitarium is published by Canelo, price £3.99 in eBook.

1 thought on “The Intel: Chet Williamson”