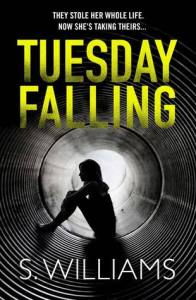 Tuesday Falling is one of those books that reminds you of lots of other stuff, but manages to be totally its own thing.

The blurb is going underground:

You’ve never met anyone like Tuesday. She has suffered extreme cruelty at the hands of men, and so has taken it upon herself to seek vengeance. She wants to protect and help others like her, to ease their suffering. A force to be reckoned with, she lives beneath the streets of London in the hidden network of forgotten tunnels that honeycomb the city – and this is her preferred hunting ground.

When Tuesday is connected to a series of brutal attacks on gang members, DI Loss takes on the investigation. A burned-out detective still suffering the devastating effects of the unsolved murder of his daughter three years earlier, the case starts to hit close to home. Because soon Loss will discover that Tuesday could hold the key to uncovering the truth about what happened to his daughter…

There’s a powerful cartoon energy to Tuesday Falling. If you like your thrillers grounded in reality, then it’s not going to be for you. It has a quirky cinematic panache to it, and it plays out as on a widescreen with carnage, explosions and techno-gear, and lost tunnels beneath the city and civil disobedience — the beginning of the book when Tuesday takes out some oiks on a tube train is a doozy — and at the heart of it is the kind of role any young actress would die for.

Tuesday herself is a devious amalgam of Lisbeth Salander, Alan Moore’s mysterious anarchistic revolutionary V and the Powerpuff Girls, with a little bit of Tank Girl thrown in. She’s a remorseless ExpendaBelle, and Williams has a lot of fun teasing her next ruthless move against the assorted scumbags and Big Bads who ruined her life.

As a character, Tuesday doesn’t develop as you’d like – she’s one of those remote clever clogs who knows everything there is about all sorts of high tech death-dealing weaponry and computer whatnots. Despite her horrific backstory, a bit more vulnerability would perhaps give us more of an emotional investment in Tuesday. But, instead, Wiiliams cleverly gives a character arc to the jaded DI Loss, an all too human cop, who finds he may have a startling connection to the vigilante.

There’s plenty of brutal violence — with a whole swathe of arrogant, testosterone driven yoofs getting their come-uppance in a myriad of unpleasant and gory ways, and the carnage stays, just about, on the right side of glib — and a ton of gleeful swearing, which is interesting because there’s a strong dystopian YA vibe to Tuesday’s feminist odyssey.

There’s a lot to like in Tuesday Falling. Williams has invented an iconic heroine for our times, and he has a very particular sense of his city, London — part Hitchockian chic, part kidulthood gang playground — and it’ll be fun to see what he does next with his singular and deadly protag.

Many thanks to Killer Reads for the review copy. I’m delighted to say that S Williams will be giving us the intel on his remarkable heroine Tuesday, next week. 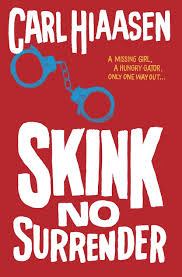 Here’s a curious thing, a Young Adult novel written by Carl Hiaasen. Skink: No Surrender takes Hiaasen’s most iconic character, his one-eyed man mountain environmental avenger Skink, and hooks him up with some troubled teens.

It’s an interesting idea, the charismatic Skink is the kind of dangerous antihero you’d probably except anxious teenage boys to adopt as substitute fathers in order that they can learn a valuable lesson about the desecration of the natural world.

The blurb will lead you down the river:

Typical Malley – to avoid being shipped off to boarding school, she takes off with some guy she met online. Poor Richard – he knows his cousin’s in trouble before she does. Wild Skink – he’s a ragged, one-eyed ex-governor of Florida, and enough of a renegade to think he can track Malley down. With Richard riding shotgun, the unlikely pair scour the state, undaunted by blinding storms, crazed pigs, flying bullets and giant gators.

Skink has become Hiaasen’s signature character, an elemental force of nature. The former Governor of California, Clinton Tyree went feral years ago, retreating into the wilderness to exact brutal revenge on the more stupid polluters around Miami in half a dozen adult novels, beginning with Double Whammy way back in 1987.

It’s the environmental message that will really appeal to young readers, I guess, but Hiaasen and YA seems a bit of an awkward fit to me. This is Hiaasen pulling his punches and a lot of the wry nastiness of his adult novels – mouldering pitbull heads attached to limbs, and suchlike – is missing, when a few more repellent turn of events would probably hugely appeal to young male readers. No Surrender is a bit – well, nice, dude.

The plot, in which Skink and Richard head down river to save the boy’s cousin from an internet predator, never really gets blown off course into unexpected tributaries. The antagonist is a dim, mouthy cry baby. But this being Hiaasen, the banter – the back and forth between the characters – is always terrific, and the middle section of the book, with the four leads trapped on a houseboat in the wilderness, is a terrific exercise in pacing.

Skink is a fabulous character, there’s no doubt about that, and there are more YA novels to feature the character on the way, apparently. But part of what makes Skink so singular is his insane conviction, and it seems to me that injecting a bit more of Hiaasen’s trademark exuberant comic malevolence would surely appeal to young adults of every age.

Many thanks to Indigo for the review copy of Skink: No Surrender.