​I’m thrilled to say that my new thriller – a standalone, twisty-turny rollercoaster of a ride, called One Bad Thing is now out. You can get it in ebook or hardback from Amazon or all good bookshops in your local high street. I’m over the moon with this book, which is the story of radio agony aunt Hannah Godley.

Hannah is kind and empathetic, and she’s just about to make the leap into the big time by becoming the regular psychologist on a famous TV morning magazine show. But on her last radio show, she takes a call from a listen which chills the blood in her veins. Because Diane recounts the tale of how her brother was once bullied and tormented by a pair of strangers… and Hannah remembers all too well that one bad thing she did.

I can’t wait for you to read One Bad Thing – and remember, if you do, and you enjoy it, please do leave a review or rating!

I’m absolutely thrilled to show you the cover of my upcoming psych thriller One Bad Thing – and, oh, what a classy thing it is.

The story of a radio agony aunt whose past comes back to haunt her, One Bad Thing is out February, but of course you can do the clicky thing and pre-order it right now. I hope you love the cover as much as I do!

I’m thrilled to say that my new crime thriller The Woman In The Wood is out. The second in the Sasha Dawson series, TWITW is about a former reality star who finds himself in a world of trouble when all his mates start getting murdered.

The Woman In The Wood is available to buy as ebook – you can get it here – or as a rather lovely hardback, with the paperback coming on June 10th.

It seems like forever since my last book The Bad Place came out, thanks to this darned pandemic, so I’m going to celebrate the end of lockdown by finally revealing to you the lush and evocative cover of the next Sasha Dawson thriller, The Woman In The Wood.

It’s about a former reality star who finds himself in a world of trouble when his mates get targeted by a vicious killer – what does it have to do with the disappearance of a young woman three years ago…?

The Woman In The Wood is out on March 4th, and you can pre-order it right now from all the usual online places like Amazon.

My latest crime novel The Bad Place has been out as an ebook and in hardback for more than a week now and I’m thrilled to say that the response from readers, from bloggers and reviewers, has been fabulous. And I was particularly pleased to discover that not only was it reviewed in The Times newspaper on Saturday – in which it was described as ‘sharp, funny, moving and tremendously exciting’ –  but it was also named The Times crime Book Of The Month in September, which is a fantastic accolade.

​Hopefully, I’ll have some more news to bring you very soo. But remember, it’s readers who really count, so if you’ve read and enjoyed The Bad Place, please do remember to leave a short review on Amazon – it really does help the book find a bigger audience! 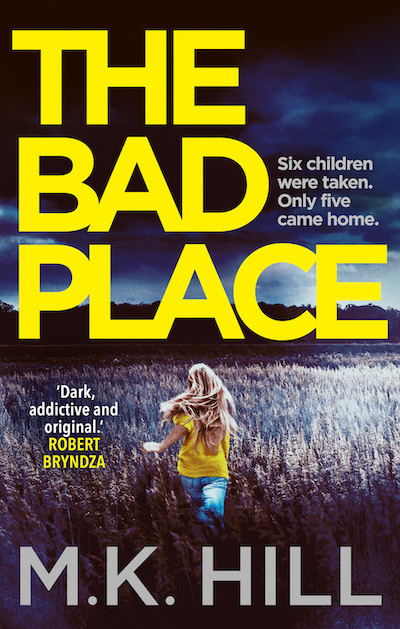 I’m thrilled to reveal the cover and title of my next book, The Bad Place, which is published by Head Of Zeus on September 5th.

It’s the beginning of a new series featuring Sasha Dawson, a detective inspector with Essex Police. Sasha leads a Major Investigation Team on Essex coast – she’s an easy-going investigator and a harassed mum with a noisy family. I’m a little bit in love with Sasha and I think you’ll fall for her too.

In Sasha’s first thrilling investigation she races against time to find a teenage girl who’s gone missing – and discover the connection to the notorious abductions that happened at The Bad Place. Here’s the blurb…

‘The newspapers called it The Bad Place. A remote farm out on the Thames estuary, where six children were held captive for two weeks. Five of them got out alive.

That was twenty years ago. Now adults, they meet up annually to hold a candlelit vigil for their friend who died. The only rule is that no-one can talk about what happened the night they escaped. But at this year’s event, one of them witnesses a kidnapping. A young girl, Sammi, is bundled into a van in front of their eyes.

Is history repeating itself? Is one of them responsible? Or is someone sending them a twisted message? DI Sasha Dawson, of Essex Police, is certain that the key to finding Sammi lies in finding out the truth about The Bad Place.

But she also knows that with every second she spends trying to unlock the past, the clock ticks down for the missing girl…’

I’m really in love with the cover, which I think you’ll agree is big and bold! I’d love to hear what you think! The Bad Place is published in hardback and as an ebook, with the paperback coming in March ‘20.